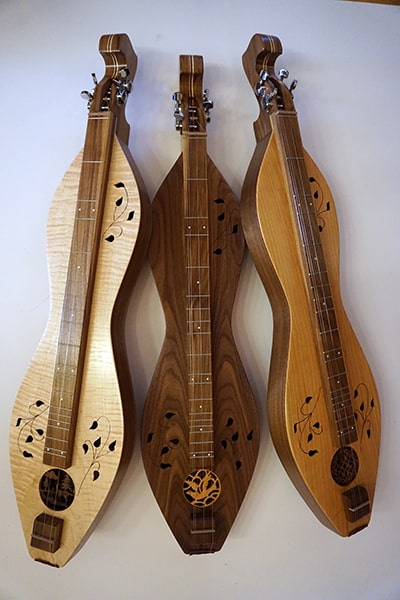 Dulcimers are string instruments characterized by their large shape and fretted strings. They are a member of the Zither family of instruments. The banjo dulcimer is a modified variant of the standard Appalachian dulcimer and has unique audio characteristics which help to give the instrument its unique acoustics.

First things first – what are dulcimers? Dulcimers are members of the Zither family of instruments. They usually have either three or four strings (although some instruments may have more) and these are fretted. This means that the strings are raised away from the neck of the instrument and are divided based on their placement. The body of the dulcimer usually extends beyond that of the fingerboard.

What is the Banjo Dulcimer?

Banjo dulcimers are modified versions of the more widely recognized Appalachian dulcimer. A banjo dulcimer, in order to create its banjo like sound, is created by adding in a vibrating membrane to the dulcimer’s body. In doing so, a unique audio is created which alters the tone and volume produced when the instrument is played.

When it comes to using the banjo dulcimer to play music, it is safe to say that it is best used as an accompaniment to singing. Its gentle music means that it complements songs well, and it is especially good for use with playing melodies, harmonies, and chords. In fact, the dulcimer is widely considered to be easier for use with chords than a generic guitar; moreover, experienced dulcimer players may even be able to pull off classic musical pieces and more with the right skills and a mastery of the more complex finger arrangements.

A key benefit of the banjo dulcimer is that of its ease of use and simplicity. Unlike many other instruments, especially string instruments, which can require a huge amount of time and skill to learn, the banjo dulcimer’s small number of strings means that it is simple to learn and master. While more complex music can be played with it, it is most commonly used as an accompaniment; as such, it’s a great instrument for new music players and young children alike to learn with.

History of the Banjo Dulcimer

Although the banjo dulcimer is a more recent invention, the dulcimer itself is actually a relatively old instrument. Historical records appear to indicate that the dulcimer was originally developed in the 18th century, although the exact date at which it was first developed is not clear. These old models of dulcimer were considered to be transitional instruments, meanwhile later models were classified as pre-revival and revival.

How Are Modern Banjo Dulcimers Made?

Modern banjo dulcimers are made following the same basic principles and rules as the Appalachian dulcimer. However, the primary difference between the banjo and Appalachian models is that of the vibrating membrane; by adding this to the body of the instrument, the acoustics produced are altered, thereby giving the banjo dulcimer its recognizable sound.

The top of the soundbox is usually made from a tone wood. These woods include spruce or cedar, both of which are popular materials for crafting dulcimers. Tone wood is particularly good for use with stringed instruments such as the banjo dulcimer thanks to their ability to enhance the tone produced by an instrument.

Banjo dulcimers – and all dulcimers in general – usually have either three or four strings. Typically, each of these strings will vary in diameter between 0.01 inches and 0.026 inches. Some strings can be custom made to have a diameter outside of this range, though, usually for specific tunings or range playing styles.

Although the banjo dulcimer usually has three or four strings, they can actually have anywhere between three and six strings, depending on their design. Dulcimers with more strings will often have one or multiple double strung strings; these provide a higher pitched melody than the single strings. As such, the exact sound produced by a dulcimer will largely depend on the number and arrangement of strings it features.

Dulcimers were first mass produced in 1969, however, the modern market for dulcimers (and banjo dulcimers in particular) is still predominantly based on handmade instruments, crafted by skilled craftsmen and small businesses. Some of the most well known banjo dulcimer makers include:

·       Doug Thomson – Doug Thomson has been making his range of hand crafted banjo dulcimers since 1980, with his instruments being dubbed “banjo-mers”.

·       McSpadden Dulcimers – The company was founded in the early 2000s. As the name would suggest, they already specialized in dulcimer making at the time, and had been doing so since the late 1960s.

·       Mike Clemmer – The “ban-jammer” instrument, a variant of the banjo dulcimer, was created by Mike Clemmer.

These are just a few of the makers of banjo dulcimers; indeed, there are many individual craftsmen and small local companies also making these unique instruments. Their affordability also makes them popular choices for many, and this further makes them good choices for small scale makers too; they don’t need as much time to create, only high quality materials and an eye for craftsmanship. As such, they are popular among makers and music players alike!

Things to Consider When Buying a Banjo Dulcimer

One of the first things that you’ll likely want to consider when buying a banjo dulcimer is that of your budget. After all, it would be ill advised to spend more than you can afford on a single instrument!

The banjo dulcimer itself is an affordable choice of instrument often, thanks to its simple design without extreme curves and dramatic design features. However, the cost of the wood materials can put the price of the banjo dulcimer up, so this may be worth considering.

To be the most cost-effective, you can consider buying used on eBay. To prevent being sold a shoddy dulcimer, check the feedback rating of the seller. T

Dulcimers have traditionally been made from locally sourced wood materials, and this is a tradition that lives on to this day for many banjo dulcimer makers too. Many use American-sourced hard woods in the creation of their instruments to ensure that the dulcimer is authentic and offers the highest quality experience, too.

So, when looking for the best banjo dulcimer for your needs, always take a moment to consider the quality of the materials used in its production. In short, any dulcimer that is made from non-wood materials – such as plastics – likely won’t give the same user and listener experience as you might expect from a legitimate wooden dulcimer.

How Many Strings for a Banjo Dulcimer?

Thinking about the number of strings your dulcimer will have is important. Dulcimers can have between three and six strings, with high string models featuring doubled strings that give a different tone and sound. So, you should think carefully about your level of skill with the dulcimer and the sound you want to create and pick a banjo dulcimer with the right amount of strings to facilitate this.

The banjo dulcimer itself is a relatively new creation, however, it has a rich and diverse history that is sure to intrigue even those who don’t have any investment in the instrument. Its early origins as a simpler alternative to the violin mean that it is not only cheaper to buy and easier to make, but it is also easier to learn.

However, that doesn’t mean it needs to compromise on the quality of acoustics it can provide. Indeed, the banjo dulcimer is ideal for music players of all levels, offering plenty of potential for use with many different songs and melodies. Its simple diatonic fret pattern makes it easy to learn and master; however, it can then be used in more complex ways to create a more powerful and impactful melody as well.

This versatility, coupled with its pleasant aesthetic and wide variety of options, means that it is an instrument which has a role in many pieces of music. Seeing its revival with folk music of the 60’s, the instrument can now be used in many roles and is great for accompanying songs or teaching young children how to play a string instrument.

If you’re interested in dulcimers but not quite feeling that the banjo dulcimer is for you, we also have reviews for the mountain dulcimer, hammered dulcimer, stick dulcimer, and dulcimer guitar.