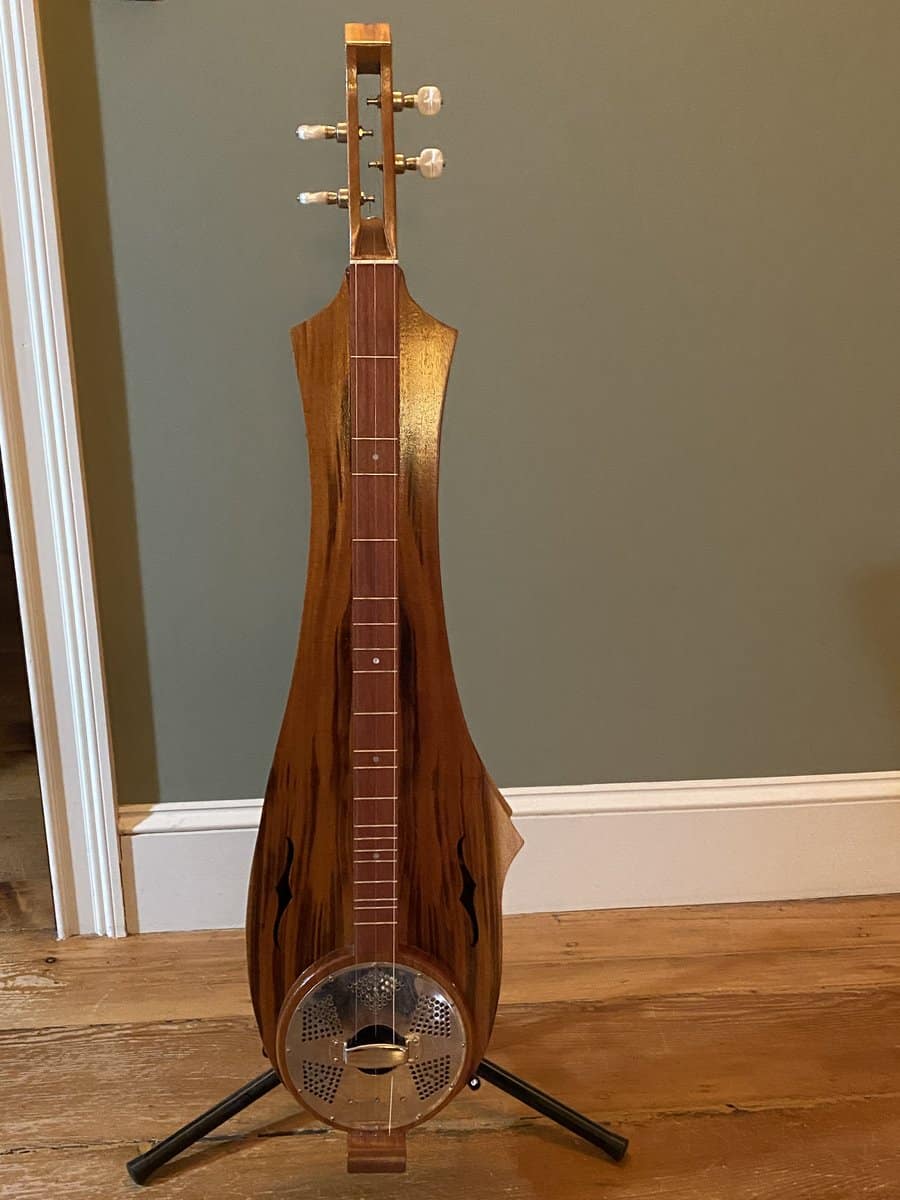 The resonator dulcimer is a unique variant of the Appalachian dulcimer. The dulcimer is a string instrument that is a member of the Zither family and it is primarily recognizable thanks to its large shape, simple design, and fretted strings.

Dulcimers are large string instruments that were first created around the 18th century. They are characterized by their three, four, five, or six strings; these are fretted, meaning that they are elevated away from the instrument’s neck.

It is widely believed that they were made as a simpler and less elaborate version of the violin, requiring less time, skill, and complex tools to create than a violin would have needed. Over time, the dulcimer has remained a reliable model of instruments; however, the interest in the instrument peaked in the 1960s.

What is the Resonator Dulcimer?

The resonator dulcimer is a unique variant of the standard Appalachian dulcimer. Unlike the generic model, this differs for the fact that it has a metal resonating cone in the body of the instrument. This resonator cone serves to acoustically amplify the sound that the instrument creates, giving it a unique acoustic compared to the normal dulcimer.

The dulcimer – and, by extension, the resonator dulcimer – is generally made from wood. Historically, Appalachian dulcimers were made from wood that was found locally to the area where the instrument was made. This is something that many dulcimer makers still take inspiration from today; usually, American woods are used in the production process as such.

Multiple types of wood are commonly used to make a dulcimer. A tone wood is used to make the top of the soundbox; spruce and cedar are popular choices for this material. The tone wood serves to help enhance the tone that the dulcimer provides, which can improve the overall acoustics when used for resonator dulcimers. As well as this, hardwoods are used for the body, back, sides, and neck of the dulcimer. These can include mahogany and rosewood, as well as walnut, oak, cherry, and apple wood.

As a variant of the Appalachian dulcimer, they can have between three and six strings. This depends on how many strings are doubled over; for example, a dulcimer with four strings will have two single strings and one double string.

When Was the Resonator Dulcimer Invented?

This is a relatively modern invention with the first known example of it was created by Homer Ledford in the late 1970s; after coming up with the concept for the resonated model in 1977, he then worked on creating the first completed model which he achieved in 1979.

Unfortunately, the resonator dulcimer – unlike other variants of the Appalachian dulcimer – has never been made on a large, commercial scale. This also differs from many other modified instruments such as resonator guitars and ukuleles. However, it is possible to custom modify an Appalachian dulcimer by individuals who have the relevant skills and tools, or a custom instrument can be ordered from a dulcimer maker.

The dulcimer is a large string instrument that was created as a simpler alternative to the more complex violin. As a variant of the standard 18th century Appalachian dulcimer, resonator dulcimers were first thought up in 1977, but unfortunately, they have never been mass produced on a commercial scale. However, there are numerous dulcimer makers who may be able to modify a standard Appalachian dulcimer with a resonator cone to provide the unique acoustics that one would expect from a resonator instrument.